SALT LAKE CITY – Oct. 26, 2015 – Attorney General Sean Reyes recently helped lead a delegation of state attorneys general from the United States to Mexico City, Mexico, as part of a criminal justice conference focused on improving coordinated law enforcement efforts to combat human trafficking, drug trafficking, counterfeiting and internet security crimes. Last year, Reyes hosted his Mexican state counterparts along with the federal Attorney Generals of Mexico and El Salvador for similar training in Park City, Utah, as part of a program funded by the U.S. State Department at no cost to state taxpayers. His team will also conduct an online legal training this November for colleagues around the world.

“In today’s global environment, the definition of a ‘border state’ has been greatly expanded not only in terms of trade and economy – but also crime,” said Attorney General Reyes. “Criminal elements in Mexico smuggle drugs, people and counterfeit products into the U.S. while money and weapons are smuggled back into Mexico. Criminals from the U.S. are often complicit in these illicit activities whether or not they are from states that share a physical border with Mexico. The more we work with law enforcement partners in Mexico and other Latin American countries to improve information sharing and training for investigations and prosecutions, the greater the likelihood we can take criminals off the streets in our respective nations.”

“I spent some very productive one-on-one time with General Gonzalez discussing legal issues and human trafficking – and this investment will result in greater protections for the citizens of Utah,” added Reyes.

Attorney General Carlos Zamarripa Aguirre of the Mexican State of Guanajuato stated, “Utah and the United States have a strong leader and great lawyer in Sean Reyes,” noting also that Reyes’ bilingual skills are an asset to the training program.

In addition to specific criminal topics, the U.S. attorneys general spent significant time training their Mexican counterparts on the nuts and bolts of criminal prosecution and defense issues as Mexico undergoes an overhaul of its’ criminal justice system. Pursuant to a 2008 Amendment in the Mexican Constitution, Mexico is transitioning away from an inquisitorial trial system to an adversarial one like that seen in the United States. The U.S. delegation was hosted at the Mexican Supreme Court where former Ambassador and now Supreme Court Justice Eduardo Medina Mora implored the delegation to continue helping Mexico.

“Eduardo is an old friend and we’ve worked together for years on economic and education issues – and it’s exciting to now work on justice reform together, “said Reyes. “What they are undertaking in Mexico is Herculean and if we can help them more quickly establish a stable adversarial system in which their citizens can start to have faith, it will help both countries. Mexico will benefit for obvious reasons and we benefit because of improved collaboration in jointly fighting crime.”

The highlight of the conference for Attorney General Reyes was a tour of a heavily guarded secret sanctuary for survivors of human trafficking. The Mexican government has made a priority of counseling, therapy, training and long-term resources for survivors of trafficking – some of whom are key witnesses in large trafficking cases.

“I was very impressed by the facility as a ‘sanctuary or safe house’ model and I look forward to further evaluating how we might be able to create such a facility to better help trafficking survivors in Utah and the United States,” said Reyes.

Attorney General Reyes was invited to return to Mexico this week to lead a U.S. Delegation to the United States-Mexico Chamber of Commerce Mexico Cumbre de Negocios Business Summit – and to speak on human trafficking and the Rule of Law in the Mexican justice transition. Other event speakers include Mexican President Enrique Peña Nieto and former Israeli President and Prime Minister Shimon Peres. Reyes will be unable to participate due to pressing cases in Utah, but thanks the hosts for the invitation.

“I’m flattered to be invited to lead a U.S. delegation to an event featuring the President and former Prime Minister of these great nations, but there’s always a balance my first priority is to the critical work of protecting Utah and its citizens and I’m needed here more this week.” concluded Reyes. 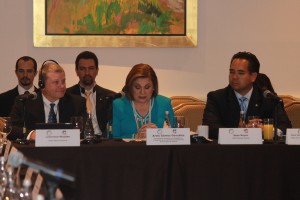 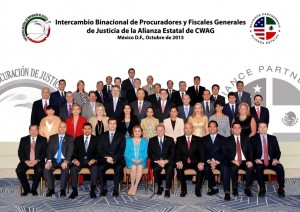