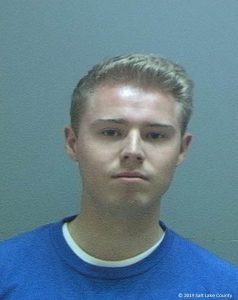 A warrant was issued yesterday for the arrest of 19-year-old Gabe Ryan Gilbert for sextortion and/or coercion of another person. The charges are comprised of five counts of aggravated sexual extortion of a child, a first-degree felony, and four counts of sexual exploitation of a minor, a second-degree felony, after he allegedly contacted and threated juvenile girls on social media for nude photos.

The Internet Crimes Against Children (ICAC) Task Force started the investigation in August after receiving a report from Snapchat that a user had been sexual extorting minors online.

“When I examined the results of the search warrant from Snapchat it was obvious the user had been engaging in very similar behavior with other underage girls. I identified well over fifty (50) potential victims of this type of sexual extortion,” said an investigator in the charging documents.

Sextortion is a serious crime that occurs when someone threatens to distribute your private, sensitive material if you don’t provide sexual images, favors, or money. Generally, the perpetrator may threaten you or your loved ones unless you comply with their demands. Sextortion has serious and devastating effects on young victims and unfortunately isn’t uncommon with our technological world and various social media platforms where predators and perpetrators lurk.

Here are some tips to avoid becoming a victim to sextortion and what to do if you become one:

The Internet Crimes Against Children Task Force (ICAC) is a multi-jurisdictional task force that investigates and prosecutes individuals who use the Internet to exploit children.

KSL: Utahn accused in ‘sextortion’ of over 50 teens, charges say