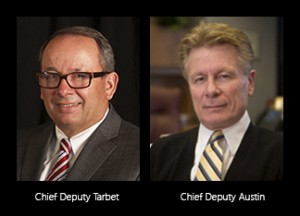 Recently, there have been a number of commentaries and letters to the editor assailing the decision by Attorney General Sean Reyes to recuse or “wall himself” off from participation in the state’s defense of Senate Bill 54, the “Count My Vote” legislation.  As two of the four senior lawyers in the AG’s office who recommended that course of action to the Attorney General, we feel compelled to correct the record.

Well prior to the passage of SB 54, Attorney General Reyes had offered both financial and vocal support to those seeking to maintain the caucus system of selecting candidates for both political parties.  When the compromise legislation of SB 54 was passed, some were disgruntled with that legislation and have now filed suit challenging the bill.  Under the ethical canons by which all attorneys, especially the elected Attorney General, must conduct their professional lives, real and perceived conflicts of interest must be avoided and they may not participate in cases in which the perception exists that their professional judgment may be clouded.  This is not an optional consideration; it is mandatory, and recusals of this type are routinely necessary in both private law firms as well as public legal offices. Members of the Attorney General executive team, including the AG, have recused themselves in other cases where there may be a perceived conflict.

Attorney General Reyes was concerned that his earlier support of the caucus system might be seen by some as reducing his ability to fully and fervently defend the case. The members of his executive team agreed that he had at least a perceived conflict of interest, and he then recused himself from the case.  Nonetheless, he made clear that his intent was that SB 54 be vigorously defended, but that he would play no further role in the conduct of the case.

The defense of SB 54 is our duty in the Office of the Utah Attorney General. Lead counsel in the defense of SB 54 is the Federal Solicitor and Chief of Staff for the office, assisted by two senior litigators, one of whom has over twenty years of elections experience.  It is the role of the undersigned to see that this team is fully and properly resourced to defend this legislation.  We pledge that will be done.

If it was only a philosophical conflict, the AG would not have recused. But realizing the potential perception of bias, he did what a good attorney should.  His was not a political decision; it was an ethical one and made with sound judgment.