SALT LAKE CITY May 31, 2017- After 30 years with the Utah Office of the Attorney General (OAG), Assistant Attorney General Alan Bachman will retire this month. Alan was honored by the OAG for his decades of service. 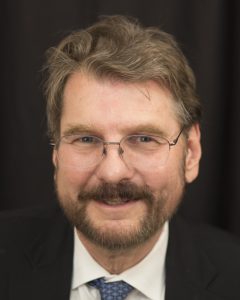 Alan Bachman retired from the Utah Attorney General’s Office this week after 30 years of service.

“Alan Bachman has made an incomparable contribution to this office that cannot be measured in years served or time given,” said Attorney General Sean Reyes. “Not only does he have a breadth and depth of legal knowledge that we will be unable to easily replace, but his unique ability to bring people together and to find solutions to difficult problems will be deeply missed. As I have gotten to know Alan I’ve seen into the depths of his soul and seen a great integrity of spirit, as well as a commitment to making everyone in Utah feel safe and welcome. We wish him all the best in his future endeavors.”

“Alan is perhaps the hardest working attorney in the Office,” said Division Director Susan Eisenman. “He is currently the only attorney assigned to handle real estate for DFCM (the Division of Facilities and Construction Management), contracting for the Division of Purchasing (all state Contracts) and is single-handedly providing legal advice regarding the prison relocation to the Governor, legislators, and the Division of Administrative Services. Any of these three assignments would be a full-time job, at least. Alan handles all of these assignments plus more.”

“Alan is the most dedicated attorney I work with at the Office,” said Assistant Attorney General Jake Franklin. “He handles a mountain of work for a variety of agencies in a manner that makes it look easy.  Alan is also an excellent, and very caring, section director. He makes time for those attorneys he oversees, and he is always full of sage advice when it is needed – no matter the issue. He is insightful and thoughtful in all aspects of his work. We at the Attorney General’s Office would do well to follow Alan’s example and to approach our work in the same way he approaches his. The Office, and, in turn, our State agencies, are, hands down, better for having him aboard.”

Alan received his Bachelor’s Degree from Syracuse University in his home state of New York before attending law school at Gonzaga University. He graduated in 1977 and spent 10 years in the Pacific Northwest before he was hired by the Utah OAG in 1987.

“With the prison project and his work with Purchasing and DFCM, he has literally saved the state millions of dollars,” said Assistant Attorney General Paul Tonks.

Alan tirelessly handles these assignments and more. He works with the Division of Administrative Services as well as numerous additional responsibilities for the Attorney General’s Office, including co-chairing the Procurement Practice Group.

Those who are outside of the office also recognize Alan’s value. During the legislative session, Alan is always on-call because legislative leadership understands that Alan is the expert on real estate and procurement law and the prison relocation. He is frequently called upon to assist in law making, contract drafting, and general legal issues. Alan is extremely gifted at looking at issues and getting to the right answer despite incredibly intense political pressure.

Throughout his professional career, Alan has used his sharp mind not only for legal work, but also for music. Alan has written hundreds of original, copyrighted songs, translating to 12 full-length CDs and one songbook. His music, often described as uplifting, inspiring, beautiful, and spiritual, is listened to around the world.

Additionally, Alan had a very active role in the 2002 Olympic Games.  He worked on the Winter Sports Park and its many facets, including the Bear Hollow Winter Sports Club, assisting with projects that ranged from utilities to ownership transfer.  Alan was the facilities expert and was influential in numerous agreements with outside groups.  He also worked on the Kearns Speed Skating Oval, Ogden Ice Sheet, Bobsled/Luge, Wasatch Mountain State Park, and Soldier Hollow for the Games.

In retirement, Alan plans on spending many hours in his recording studio, as well as completion of rabbinical school, continued work with the North American Interfaith Network, hiking, swimming, and spending time with his nine grandchildren.